The History of the Mathis House

A House With Pedigree

The Mathis House not only offers the comforts and cuisine of today but is also filled with a rich history dating back to the late 1800s. For nearly 120 years the home has occupied the tree-lined block of Historic Main Street, the mansion has stood out as both an exquisite example of period architecture, and a reminder of Toms Rivers’ deep historical roots.

The house was constructed in 1898 for a local businessman, and was quickly recognized as an outstanding example of Colonial Revival architecture. However, because of its lavish over-sized windows, grand porch and detailed ornamentation, it appears distinctively Victorian, and the flavor of that era has been maintained at this stately mansion ever since.

The house was purchased by Mr. Mathis for his wife and one son, who later loaned the home the nickname, “The Mathis House”. Thomas A. Mathis, also known as Captain Tom for his many accomplishments on the seas, resided in the house through a political career that spanned some 50 years. 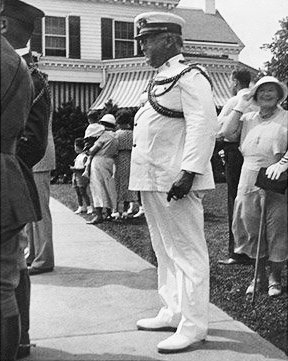 Mr. Mathis, who was born in 1869, resided in New Jersey for nearly all of his life. But in his early years, following in his father’s footsteps, he sailed the world. He was a master seaman at the young age of 18 and served as second officer aboard J.P. Morgan’s yacht, “Corsair,” on its first round-the-world cruise in 1905.

Later Thomas became the ship’s Captain and won the Americas World Cup. Throughout his life he maintained yachts and his connection with the seas. Due to his maritime roots, Toms River was the perfect place for him to raise his family. The home on the third floor has a Widow’s Watch, where from the roof top of the mansion, the entire scape of the Toms River may be seen.

Mr. Mathis and his wife, Helen S. Steelman, purchased the house with his brother-in-law, Maja Leon Berry and his sister-in-law, Edna Steelman, in 1912. During the couples’ residence, the mansion was the scene to many elegant parties and dinners. Mr. Mathis and Berry family owned the home during the prohibition where those stories remain a mystery.

The wealthy families resembled a prestigious life with home full of service staff to the modern day famous show- Downton Abbey. From the kitchen of the Inn is the servant’s entrance to the second floor where today’s Bed & Breakfast staff utilizes during the busy afternoon tea service.

Mr. Mathis involved himself as one of the first Ford Dealership owners in the automobile business in Philadelphia & Toms River, he was the owner of the Mathis Drug Store, and was involved in real estate throughout New Jersey. His preoccupations, and occupations were known by many but he was most well- known, historically, for his accomplishments in politics.

By the time he purchased the property at 600 Main, Mr. Mathis had already served the state and its residents in several civic roles for a decade. He was appointed to the New Jersey Senate in 1909 and went on to be re-elected for a half-dozen more terms, rising to become Republican majority leader, then president of the Senate in 1929. In 1931 he was appointed Secretary of State of New Jersey, and served in that position until 1941. Through all that time, he was known as the “King Pin of Republican Party” saturated in politics in New Jersey and residing in Ocean County. 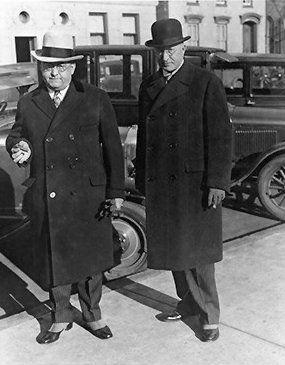 Thomas Mathis passed away in 1958, but his name remains well known in this community, not only for the beautiful historic home he left behind on Main Street, but for the rich history of the years he dedicated his life to public service and for his accomplishments to the New Jersey State Judicial System.

On May 24, 1950, the State of New Jersey dedicated the bridge on Route 37 that spans the Barnegat Bay and connects the Toms River with the major route onto the Jersey Shore beaches. The bridge is named the “Thomas A. Mathis Bridge” and is another historic landmark for Ocean County. Many vacationers and sea lovers are delighted as they travel the bridge that overlooks the gleaming bay waters toward recreation, fun and seaside memories.

Mr. Mathis was skillful at quilting, crocheting and knitting – hobbies he came to enjoy after spending so many years alone at sea. The Ocean County Historical Society, located minutes away from the Inn, possesses one of the quilts Mr. Mathis made at sea from materials garnered in foreign ports.

So fabulous to step back in time and enjoy the pampering.

"This turn-of-the-20th century themed bed & breakfast is amazing. We were warmly welcomed and offered freshly baked cookies. While all the "modern" conveniences are available (internet, ice, blow dryer, etc), everything else takes you way, way back in time. Antiques abound. The overall ambiance is extremely warm (literally - the fireplaces are on).

The fresh breakfasts were so beyond my expectations (one day included scones with clotted cream, a delightful yogurt/fruit/granola cup, fresh melon with an omelet and toast; another day was spinach quiche along with fresh pastries, a fruit medley, and yogurt). We loved the quiet - no clanging elevators, no noisy guests). Fresh cookies at night. Lovely teas to choose from. We booked Queen Alexa, which is the best room there with a big bed, decent sized shower, a very large sitting area. Our room was clean and perfect (comfy bed, comfy pillows). We will be back!!!!"
-- Mer1212